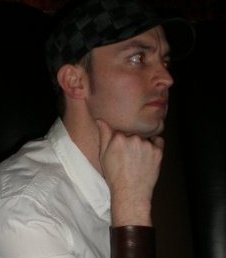 The man, the myth, the legend!

Bronson was born in a quiet country town called Ballina which is located in Northern NSW (thus making him a NSW supporter who lives in Brisbane, Queensland!). As a child, Bronson passed the time by playing oboe and clarinet in various school bands. Unlike most children Bronson wasn’t fascinated by television, instead his fascination was with novels. He spent many a waking hour with his nose buried in a good book but it should be noted that he rarely took the time to read a school textbook because learning came naturally to him.

In 1998, Bronson finished his high school education after completing geek like subjects such as Maths, Physics, Chemistry, English & Economics. Bronson then attended Griffith University and began studying Microelectronic Engineering. After six months of this course Bronson decided that his interests were in Information Technology and he completed an Advanced Diploma in Information Technology (Applications Programming) at Moreton Institure of TAFE.

Bronson has worked in several different organisations in varied roles on projects that have included web development, web design, custom programming and search engine optimisation. He has also spent some time working as a freelance developer but he prefers a team environment and he thrives on large projects that require lateral thinking and planning.

Bronson is skilled in numerous web programming languages such as XHTML, CSS, Javascript, PHP, mySQL, MSSQL & XML. He has an incredible knowledge of software suites and likes to tinker with computer hardware. Bronson has always bought his computers in parts so that he can assemble them himself which he believes can be blame on the hours spent playing with LEGO as a child.

Bronson loves open source software. He’s a massive fan of WordPress and is currently working on some free themes to distribute to give something back to the open source community. He has used many content management systems over the years and used to be in love with Joomla but WordPress is growing at a much faster rate and he prefers the new features that are included in each new release.